U15 Hurlers are County Champions!

You are here: Home / U15 Hurlers are County Champions!

U15 Hurlers are County Champions!

The U15 hurlers completed a league and championship double in spectacular fashion on the banks of the lovely River Lee. This match was a repeat of the league final, which Carrig won by a goal (2-14 to 1-14) in early September.

Carrigtwohill looked sharper than Ballygarvan on the all-weather surface from the throw-in, playing into the breeze. The very lively Cillian Barry fed Cian O’Riordan who raised the first (white) flag of the match. Barry was again supplier for Carrig’s first goal, having latched onto the break from the Carrig puck-out; his delivery was won by Oisín Lynch who cut in and finished low to the far corner of the net. Joel Joseph followed up just a minute later and batted his effort to the Ballygarvan net to give Carrigtwohill a seven point lead after just six minutes. Ballygarvan pointed a free and Carrig got their next four scores to Ballygarvan’s single point courtesy of Cian O’Riordan (point), Mark O’Connor (point), Cillian Barry (point) and Oisín Lynch, who blasted to the net following a fine angled pass from Mark O’Connor. In the middle of this scoring flurry, Ballygarvan threatened the Carrig goal but Fionn Kidney pulled off a fantastic save low to his left and the alert Neil Coughlan blocked the follow-up attempt. Carrig were now leading, 3-04 to 0-02 after 20 minutes. Ballygarvan then hit the only (ten minute) spell during which they dominated the match as they put pressure on the Carrigtwohill puck-out. The Carrigdhoun side scored seven points (one from a free), some of those being fine efforts from distance. Carrig registered a single Oisín Lynch point during that time, as he collected a Mark O’Connor delivery from a quickly taken indirect free. This brought Ballygarvan to within five points of Carrigtwohill approaching half-time. However, Carrig finished the half strongly to give themselves a cushion going in at the break. Seán Brennan showed well for a long clearance, fielded well and offloaded to Mark O’Connor who split the posts from the left wing. Adam Rooney added another point after great vision from Mark O’Connor to find him in space with a cross-field pass. Fittingly, the player who stormed into the game from the get-go capped off the half; Cillian Barry scored from distance to make it 3-08 to 0-09 at the short whistle. 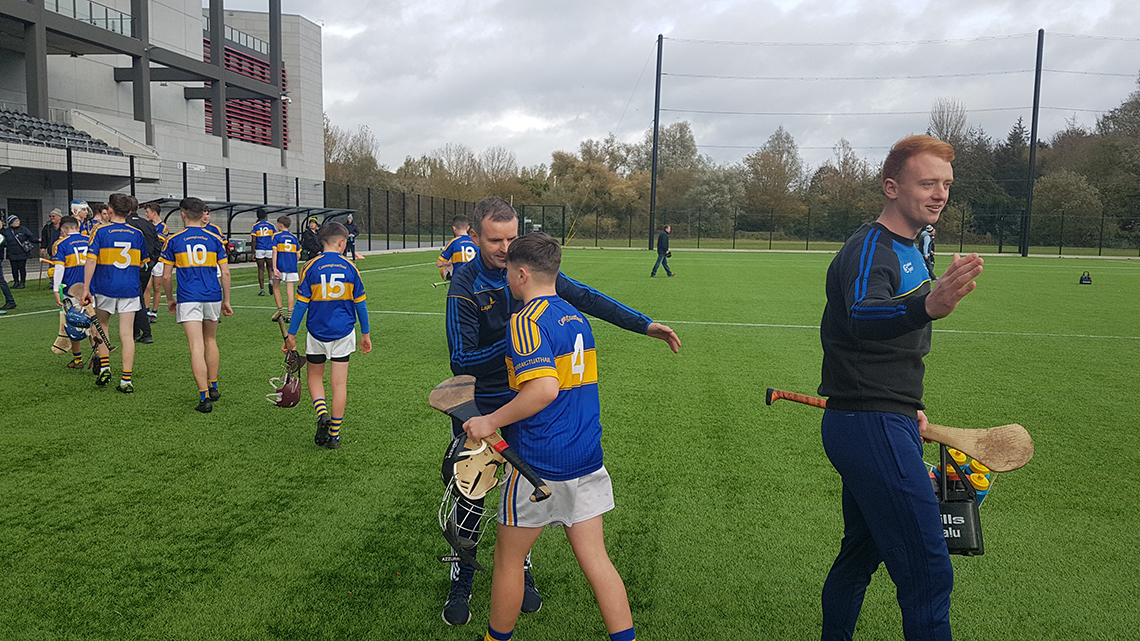 Carrig kicked on early in the second half. Mark O’Connor pointed from a Joel Joseph delivery and then traded frees (one apiece) with Ballygarvan. Adam Rooney and Daniel Murnane both pointed from distance, making use of the wind assistance. Mark O’Connor hit a lovely point over the shoulder. This was the first of four O’Connor scores on the trot; the second one coming from play, followed by a ‘65’ and a free. Ballygarvan responded with a point to make it 3-16 to 0-11 midway through the second half. The Carrigdhoun outfit went for goal but Fionn Kidney pulled off another top drawer save and deflected the ball over the bar. It was the Carrig keeper’s busiest spell of the match because a minute later he saved a solidly struck penalty and also stopped the follow-up ground shot, which was cleared by the backs. Carrigtwohill pushed up the field to register the last five scores courtesy of a brace from Mark O’Connor (one ‘65’), Adam Rooney (two monster points from 75 metres) and a point from Cillian Barry. 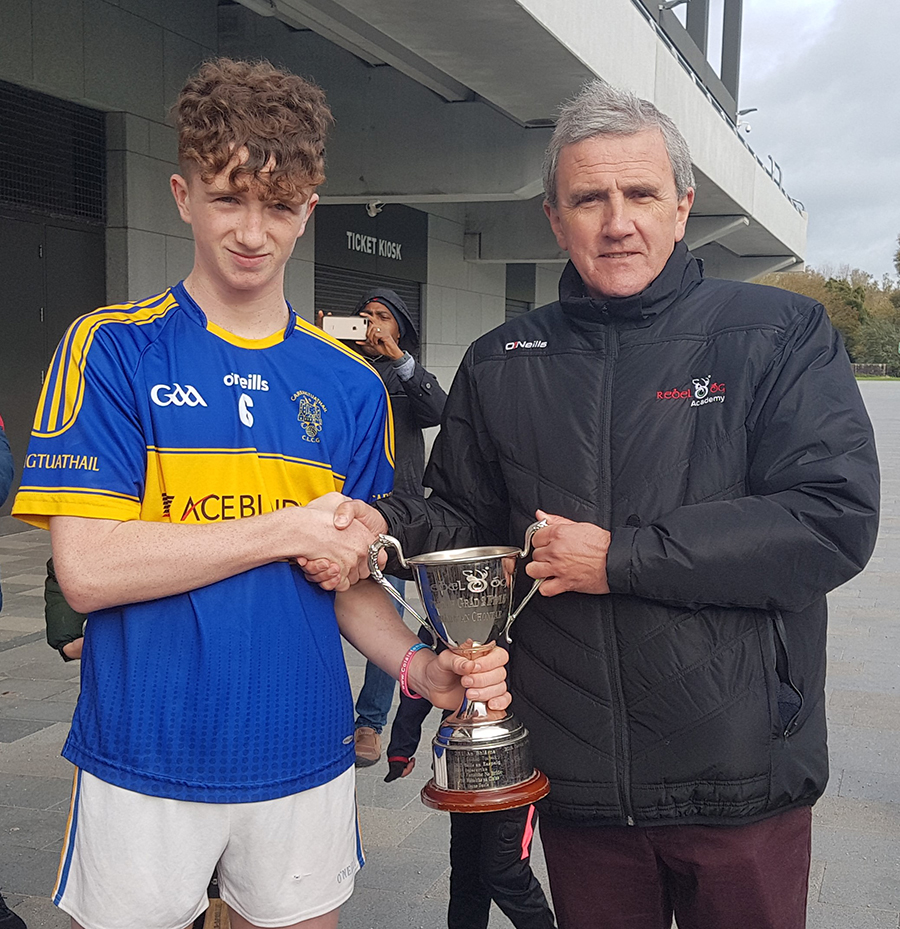 Team captain, Neil Coughlan accepted the cup from Michael O’Mahony, Chairman of Rebel Óg Central. Neil thanked the coaches for sticking with them and said that after their loss in the semi-final of last year’s championship, they had trained hard to get to the final. He thanked Páirc Uí Chaoimh for the fantastic facilities, Ballygarvan for their contribution to the match, the referee, Pat Lyons and his officials. Neil had a special word of thanks for the parents for dropping the players to training and bringing them to matches all over Cork. 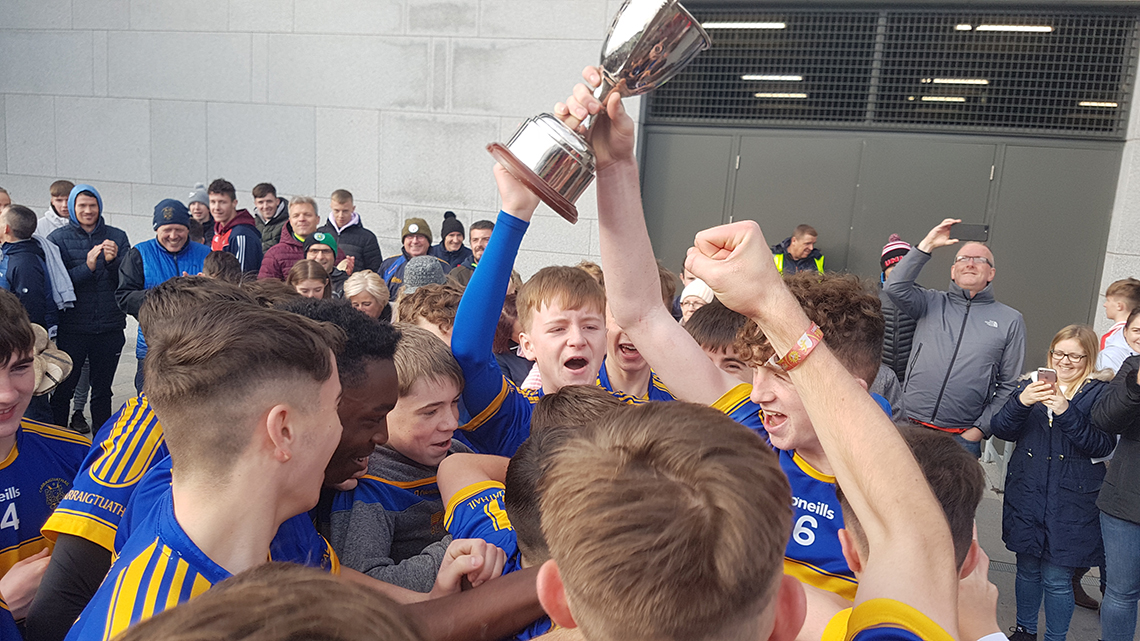 This was a complete performance by the entire panel and their committed management team of Mervyn O’Connor (manager), Tomás Hogan, Conor McCarthy and JJ Barry. Huge congratulations to all involved in this success, which is a great finish to the year. The parents of this group should also take a bow; they are always at the matches giving massive (and sometimes very vocal; ahem, Mary!) support to this team who are making very steady progress as they go up through the ages. Without the interest and enthusiasm of the parents, none of this would happen.

Credit must go to Ballygarvan for their part in a very sporting contest.