In 1995 the Ladies football club was formed. Valerie Collins and Siobhan McCarthy called a public meeting to gauge interest and found no lack of support. Gerard Barry and Seamus Collins were enlisted to train the team and, though most of the players were beginners, their rate of improvement in that ﬁrst season was remarkable. 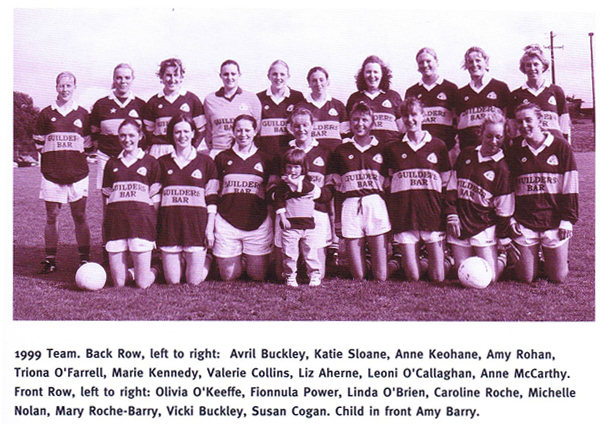 Carrig lost to an experienced St Endas team in the ﬁrst round of the county championship at Bishopstown, but it was only a narrow defeat and it represented a solid start. The selection of Valerie Collins and Siobhan McCarthy on the Cork senior panel, however, put the club on the map. Frank Savage, Paul and Fiona Keegan took over the team in 1996 and, with victory over Watergrasshill in the Midleton Gold Watch tournament, the club landed its ﬁrst piece of silverware. Carrig trailed by 1-4 to 0-0 at halftime and fell a further point behind early in the second half. The Imokilly People takes up the story.

“Carrig showed great character and refused to accept defeat. Claire Devine, who came on as a sub at half-time, ran on to a high ball and had no hesitation in ﬁnishing it to the net. Inspired by the goal, Carrig continued to edge back into the game due to some excellent free taking by Caroline Roche. Deirdre O‘Riordan added another point from play to bring Carrig to within one point of the Hill.”

“Due to continuous pressure the Hill conceded several frees and this was their downfall” as Caroline Roche finished off the game with two more converted frees to leave the score 1-6 to 1-5 in Carrig‘s favour. ” 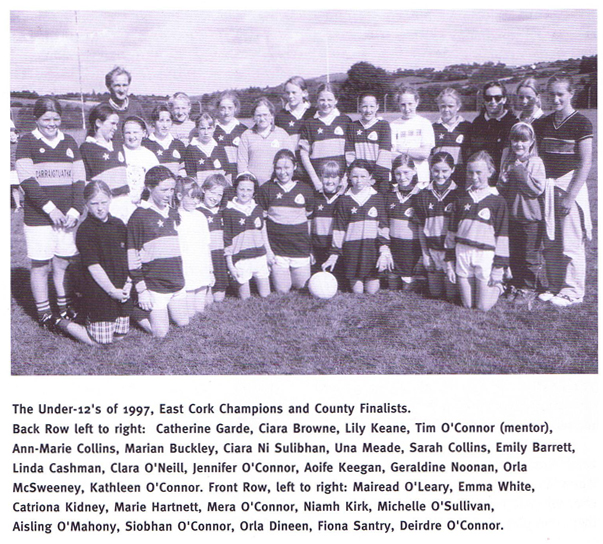 The East Cork board was re-formed that year with Valerie Collins appointed secretary and the East Cork championship was revived. Carrig coasted through their semi-ﬁnal with a comprehensive victory over Aghada but, in the ﬁnal, Watergrasshill took revenge for the Gold Watch defeat. Valerie Collins continued to be a member of the Cork panel and was joined by Liz Ahern; Carrig also had a strong representation on the Imokilly panel.

That year, too, Tim O’Connor established a juvenile section to the club with immediate success. They won an East Cork U-14 championship beating Inch in the ﬁnal, just a week after many of those Inch players had won an U-13 A county championship. The U-12s played Watergrasshill in the East Cork ﬁnal as well and were unlucky to go down. In the following years O‘Connor‘s tremendous energy and enthusiasm would drive the juvenile club to repeated success.

In 1997 Carrig retained the Midleton Gold Watch tournament with a victory over Aghada but, in the East Cork championship, Carrig were victims of their own complacency against a very young Inch team and were beaten. They took some consolation by beating the same opposition in the ﬁnal of the East Cork league. Consistently good performances in the county league were a good yardstick of the club’s continued improvement but they still couldn’t muster a run in the county championship.

It was a remarkable year for the juvenile section, however. The U-14s retained their East Cork title while the U-12s and U-16s both reached East Cork and county ﬁnals. Unfortunately, Rockchapel were too good in the county ﬁnals and both East Cork ﬁnals were also lost, but the depth of talent in the club was clear. The selection of Alison Donnelly, Aoife Fouhy and Noelle McCarthy on the Cork juvenile panel was another indication of that. Valerie Collins continued on the Cork senior panel and Anne Keohane also made the panel in 1997.

Under the new management of Adrian Kidney and Paul McCarthy the junior team enjoyed the best year of its short existence in 1998. They hammered Watergrasshill in the East Cork ﬁnal and, after a string of excellent performances in the county league, took Beara to a replay before bowing out of the county championship. Against such a stronghold of the game it was an outstanding performance. 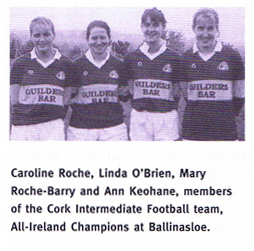 Better was to follow. Carrig were invited to participate in the All Ireland junior sevens at St Judes in Dublin and, after a gruelling day, involving seven matches, they were narrowly beaten in the ﬁnal. Anne Keohane was voted player of the tournament and the club had reached a new level in its development.

In the same year Keohane won an All-Ireland intermediate title with Cork, along with sisters Caroline Roche and Mary Roche-Barry. Having won the junior All-Ireland four years earlier, this was Cork’s first intermediate title. A further honour for the club was Linda O’Brien’s captaincy of the Cork juniors, who were beaten by Waterford in the championship.

Anthony Cashman took over the junior team in 1999 and Carrig won their ﬁrst four games in the county league. Because of those results they were graded in the county championship and were drawn against Watergrasshill. Carrig, trailed badly at half time, but raised their game significantly after the break and two goals in the dying minutes saw them through by two points. For Carrig, it was their first victory in the county championship.

Gabriel Rangers were Carrig’s opponents in the county semi-ﬁnal and once again Carrig failed to raise a gallop in the first half. They gathered themselves in the second half, but they had conceded too great a lead to rescue the match.

There was more heartbreak for the club’s juvenile teams. The U-12s, U-14s and minors all reached county ﬁnals but failed to win any of them. The U-12s were complete underdogs against Liscarroll but gave them a great match to lose by just two points. The U-14s lost to a Ballydesmond/Rockchapel combination, while the minors were beaten by Gabriel Rangers.

The future for the club, though is bright. Membership has grown from 35 in 1995 to over a hundred now and this year (2000) the secondary school in the village started a team which will further widen the base of talent. Greater successes lie ahead.

Listed below are Carrig panels from the 1999 season.