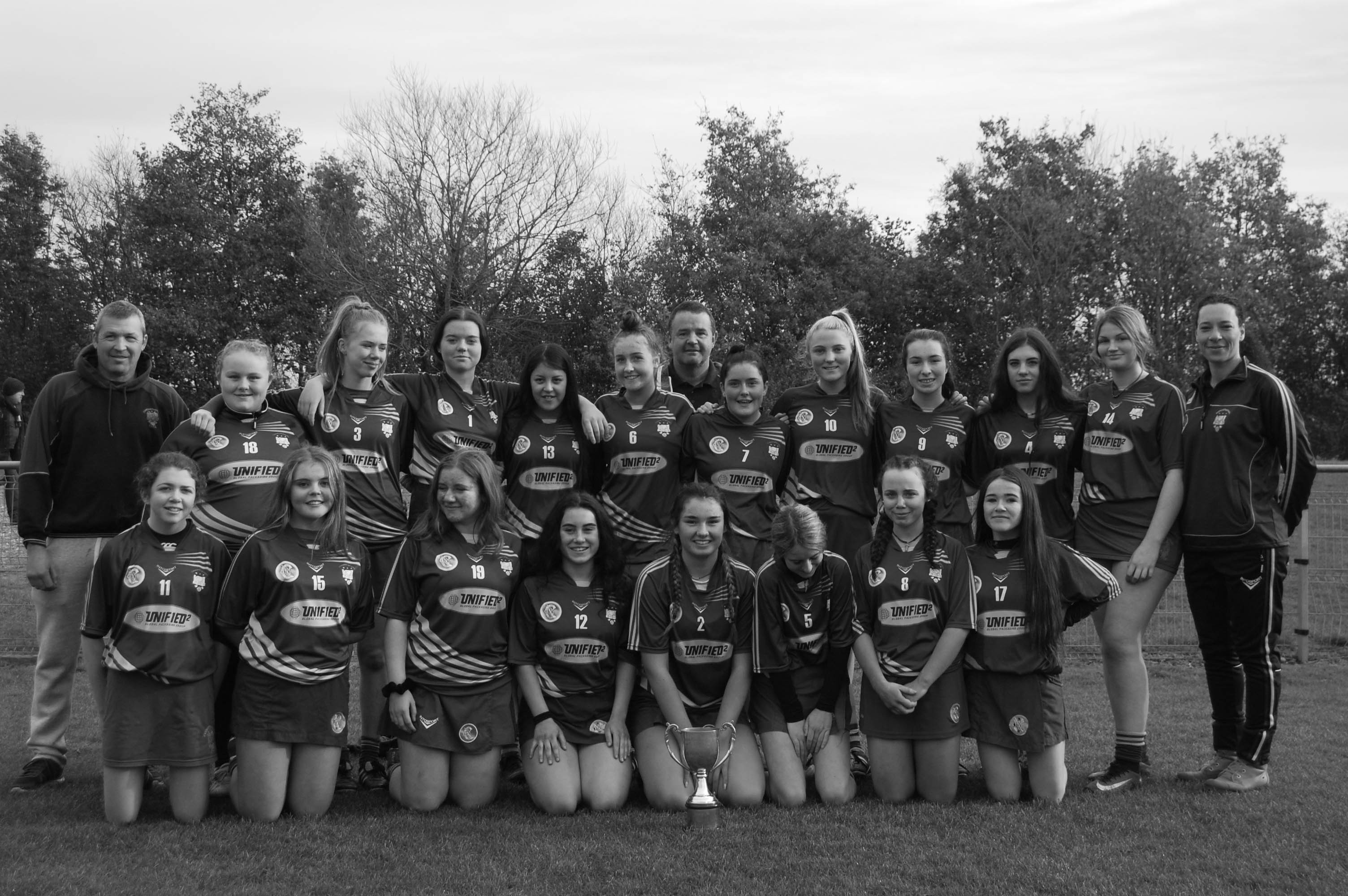 Carrigtwohill Camogie U16s ended their hard working season off in style by winning the 16C League Cup, in the Cork Senior Camogie grounds in Castleroad, Blackrock.

Arriving very early to the Cork Senior Camogie grounds in Blackrock for a 10am throw in, you could tell the girls were confident for the win. However with 1 girl out injured, and 2 carrying injuries into the match our number were tight against the 23 squad Blarney. Having played them in a Challenge match earlier in the year we knew that it would be a strong, physical match.

Captain Katie Ryan led the team out and from the first whistle, both teams started strong with Carrigtwohill breaking through in the 2nd minute with a point from play by Sinead. Always a confidence boost to gain the first score this was followed up closely by Michaela who scored a lovely struck goal from play in the 5th minute. Our girls managed to keep the play up near the Blarney goal and were awarded by another goal scored by Ruth shortly afterward. Blarney battled strong, and were awarded by a point from a free in the 10th minute . We responded quickly and kept pushing for more scores, but Blarney adjusted and moved an extra player to their back line which made it tougher for us to score. Wides from April, Holly, Kerrie and Una kept the excitement going and finally Ciara Walsh added to the score-line by breaking through quickly in the 25th minute, striking hard and finding the back of the net. Blarney responded straightaway though and after a wide attempt, they found the back of the net just before the half time whistle.

The score at half time was 4:1 to 1:1. After a positive team talk, our girls took to the pitch under no allusions that Blarney would try their level best to catch us up. And that they did. After a quickly scored goal by Ruth, Blarney responded by scoring in the 2nd minute and kept the pressure up around their goal which frustrated out girls in any more goal attempts. From then on we were forced to focus more on increasing our point tally, heeding their coaches’ advise during the half time talk. As is Aisling’s way, a lovely run followed by a perfect strike saw her on the scoreboard finally – well deserved after a lot of hard work and a couple of wide attempts. A foul by Blarney saw her increase her point tally to 2 after she found the goalposts from a free. In the 20th minute, Katie Walsh’s hard work was also awarded by a point.

Plenty of attempts by Blarney saw our backline having to work hard – Maedhbh played a stormer by defending forward and consistently finding space to keep the ball sweeping away from our goal. A foul in the 13th minute in front of goal saw Ciara Horgan having to defend a penalty. But there wasn’t much she could do to stop the penalty strike which flew past her left and low to the ground. However Ciara’s puck outs during the match played a huge role in keeping the pressure off. Her quick reflexes saw her saving attempts at goal and keeping the Blarney score-line down. Katie and Sadhbh stayed deep in defense hassling their markers when needed. Alannah who came on for Sadhbh early in the 2nd half continued in the same way, helping to keep Blarney from scoring any further. Michaela and Ciara, consistently strong as usual, kept the half backline secure with help from April who marked her player closely and made some lovely passes forward throughout the game. Abbie seemed to be everywhere in the 2nd half and with Aisling kept the play moving forward nicely throughout midfield Kerrie, although unusually not finding a score today, kept the Blarney defenders busy and did everything bar score and was unlucky with a quite a few wides in both halfs. Una saw plenty of play throughout the match and like Kerrie, nearly found a score quite a few times. Holly was unlucky not to get a point in the 1st half and made some brilliantly fast solo runs forward to assist in scores. Clodagh and Katie Walsh as usual hassled in front of goals but finding the back of the net is always difficult with an extra defender in play from the opposition.

Thankfully Carrigtwohill kept their lead throughout and finishing with another point from play by Aisling in the 25th minute, kept Blarney at bay until the final whistle blew, much to the delight of players and supporters on the sidelines.
A deserved win and an exciting match! Genuinely in this case, the score does not reflect the battle or skills that Blarney brought to the pitch. They fought for a win until the last whistle and at no stage did our girls feel like they were getting an easy one. But to the credit of our girls, they communicated well and kept their cool. After many cold wet nights of training deep into October and November, with excellent attendance throughout the year, we are so delighted that our girls found a win today.

It has been a long busy season – from February to mid-November this panel have played in over 15 competitive matches, not to mention quite a few Challenges, between their 14, 15 and 16 age groups competitions. Not to mind juggling football matches, school, Junior Cert and socialising! Nobody can say they don’t work hard. Credit taking the to coaches Philip and Val and mentor Natasha for guiding them throughout the season along with the U14 coaching panel Conor, Lorraine, Rosie and Catherine. And of course our wonderful families for putting up with our constant texts and driving their girls all around the County!

A well-deserved lunch in the Elm Tree after the match was a great finish to a fantastic season. Enjoy the winter break everyone.