Fé 12 hurlers reach the Final of the Colman Dillion Tournament

You are here: Home / Fé 12 hurlers reach the Final of the Colman Dillion Tournament

Fé 12 hurlers reach the Final of the Colman Dillion Tournament

Carrigtwohill were seeking to make it a three-in-a-row, having won this U12 hurling tournament in 2017 and 2018.

The host club were Carrig’s opponents in their opening game and Carrig ran out 2-04 to 1-03 winners. (Scorers for Carrigtwohill: John O’Connor 1-1; Cillian Rooney 1-0; Tom Walsh, Jarlath Cullimore & Ryan Fitzsimmons 0-1 each.)

In the second game, Carrig took on Watergrasshill and played some great hurling in the second half to overcome a two point half-time deficit to win the match on a scoreline of 4-04 to 1-06. (Scorers for Carrigtwohill: John O’Connor 1-1; Tom Walsh, Cillian Rooney & Ryan Fitzsimmons 1-0 each; Daniel McCarthy, Alex O’Sullivan & Brian Healy (‘65’) 0-1 each.)

Carrigtwohill’s two wins put them into the cup final. St. Finbarr’s came through the other group and Carrig knew they were up against it with the city side as their opponents. They were trailing 0-01 to 1-03 at half-time having played into the breeze. Carrigtwohill fought very hard in the second half, showing great heart and determination. They were equal to the Barrs in every way bar putting the ball between the posts. The final scoreline of 2-05 to 0-02 doesn’t do justice to the Carrigtwohill effort. (Scorers for Carrigtwohill: Daniel McCarthy 0-1, Tom Walsh 0-1 (f).) 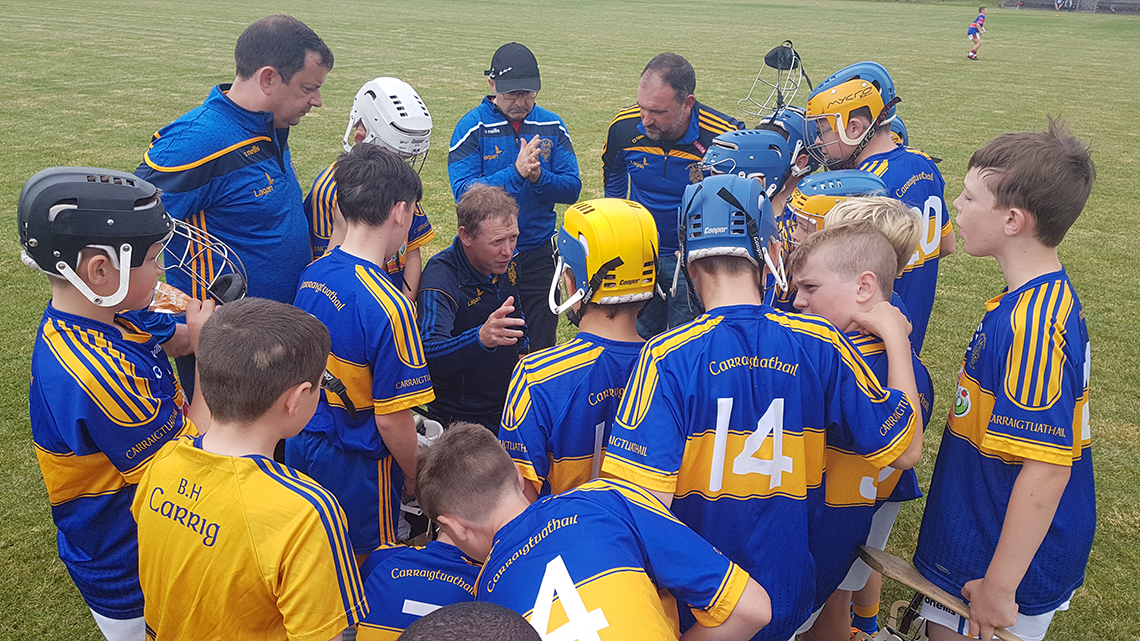 Well done to the team and their coaches/mentors on reaching the final and on the tremendous effort that they put into that match against a side that is two grades higher than them in the Rebel Óg Central leagues. Sincere thanks to the host club, Erin’s Own for the hospitality that they showed on the day; míle buíochas also to all the parents and supporters who made their way to Caherlag.