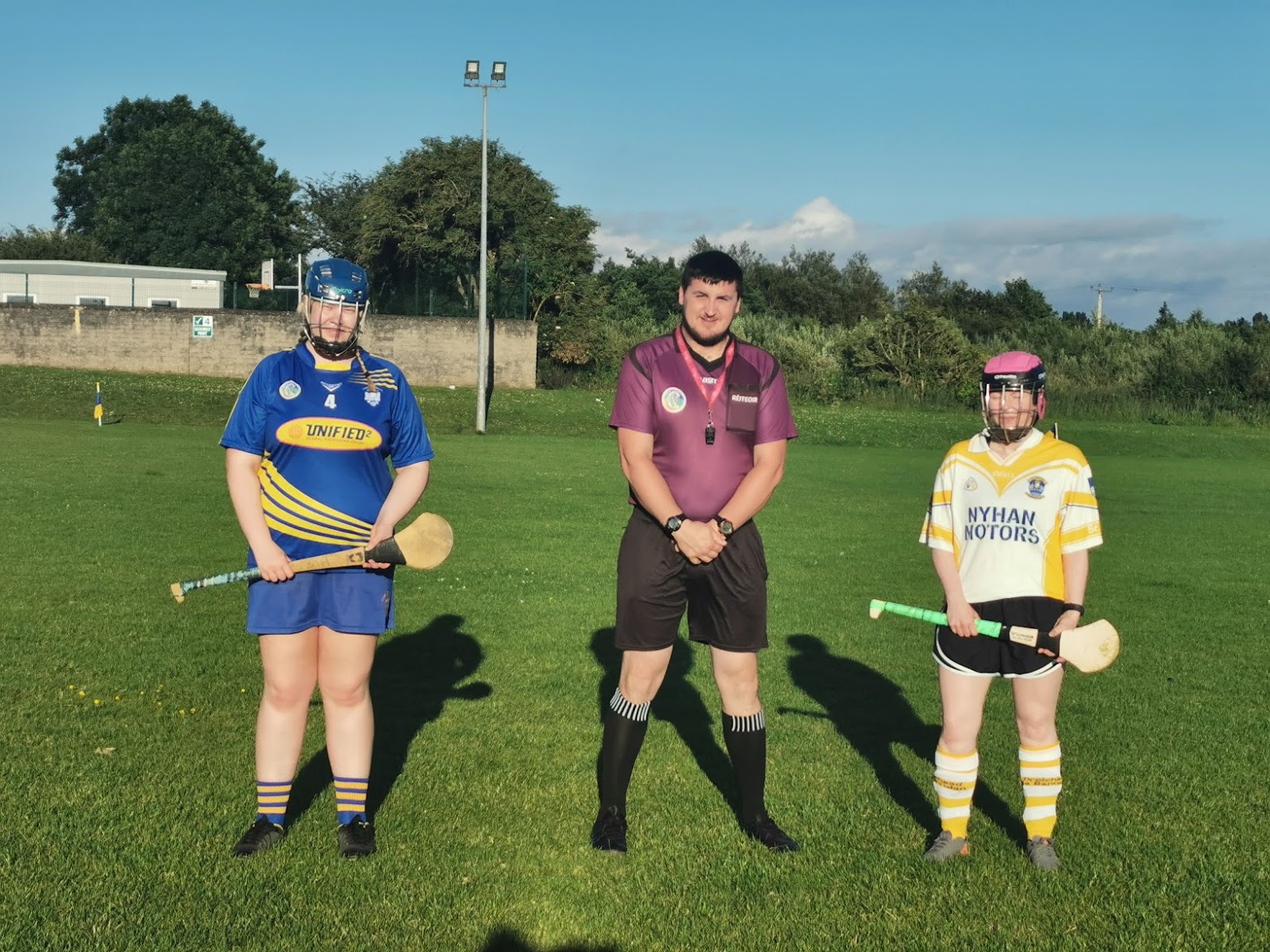 Tonight, we were led out onto the pitch by Miriam as Captain when our JuniorC Team welcomed Bandon to the West End for our Round 5 League fixture in Junior C. At the request of Bandon, we played 13 a side and when the whistle blew both teams settled in well and right from the get-go the pace was fast on what was a hot muggy evening with little breeze. Within the first 3mins Nicole had scored a point and was unlucky not to have secured a second one. As the girls settled in Michaela scored a beautiful point from outfield and less than a minute later Robyn was unlucky not to have scored a goal but determined as always and with the support of her teammates in keeping the pressure on, she scored a goal in the 5th minute of the game. From there on Carrig settled in and Nicole and Michaela got further points on the board. Ciara in goals made a fantastic save in the 9th minute with Bandon’s determination to get on the scoreboard not wavering. Play quickly went down the Bandon end again and Michaela was unlucky with a tight angle shot for a point to go wide of the upright. With Carrig’s’ midfield putting in tremendous effort to maintain possession from puckouts Michaela and Robyn quickly followed up and kept the momentum going with 2 more quick points with some beautiful movement of play from puckouts won in mid field. Bandon secured possession and headed for goal with Ciara once again making a fantastic save on goal in the 15th minute. Bandon were certainly still trying to get on the scoreboard. As Ciara sent out a beautifully accurate puck out Michaela was unlucky not to score on goal with a deflection. She was unlucky her attempt went wide but 2mins later again she was successful on the scoreboard. From there Robyn and Michaela pushed on with 2 fantastic shots that went over the bar and Aisling was unlucky with her attempt going wide. The girls went in at the water break confident of their first 15mins performance. At the start of the 2nd quarter again Michaela started on fire and got a quick point, but Bandon quickly responded with a point themselves. With Bandon winning possession of the puck out they were determined again to head for the Carrig goal, but Alannah made a fantastic clearance in the back line to defy them again. As Alannah cleared the ball quickly up the field and through a lovely passage of play Nicole sent the sliotar to the back of the net, GOAL! The second quarter was definitely a more challenging quarter for us, and Bandon settled in and kept pushing for possession, but we kept trying and Katie was so unlucky not to score a point in the 26th min but just before half time whistle blew Aisling was successful in her attempt to send the sliotar over the bar.

At half time we enjoyed the cool drinks and substituted Una for Aisling, Katie for Amy, Abbie for Courtney. All these ladies have put tremendous effort into our last number of games. Again, Michaela was quick off the mark and was unlucky with a wide attempt over the bar before a quick puck out was won and resulted in a GOAL! by Michaela. Bandon were not giving up and showed tremendous spirit with a lovely passage of play down the field where Ciara made another stunning save on goal. As quick as the sliotar went into the Carrig end again it was cleared by Ciara well into midfield where Robyn’s attempt for a point went wide. A quick passage of play and with mid field performing well with the introduction of Abbie and Katie in winning every ball the sliotar came in for Kerrie to act quickly and send it to the back of the net, GOAL! For the next few minutes there was nothing but determination from Miriam and Michaela with Michaela sending one wide and scoring a point and Miriam unlucky to not have her attempt go inside the upright. For the next 3mins Carrig kept pushing but were unsuccessful with 3 wides on the trot from Miriam, Nicole and Michaela. The work effort the girls put in to build on their confidence is commendable. With a few wides gone astray the team settled in again and we scored a further 3 points and 2 goals before Bandon responded with a point. With a change of Taylor to forward line she quickly fitted in with a goal and a point within 3 mins. In the last seconds of the game Kate won a free in and was unlucky to drop it short and cleared by the Bandon defence. Throughout the game Bandon never gave up and showed great character and respect for the game. But with the diligent work of Sarah, Abbie, Susan, Alannah, Taylor Amy, Aisling and Courtney Bandon found it extremely hard to break midfield and the back line.

With our bye in this league already used up the girls have had 4 games in a row now with 2 more to follow. It is very visible from all of their supporters how much the girls have improved from their first game and it’s a credit to how they apply themselves in training. We have new members joining this group all the time and its lovely to see them all settle right in as if this team have been playing together for years. The spirit and comradery that is developing within this group is something very special to be part of.