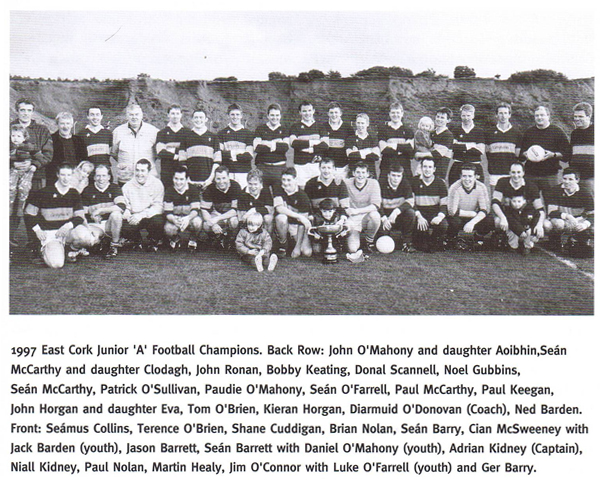 On Friday, 4th November, Carrig’s 1997 East Cork Junior A Football Championship winning panel and management marked the silver jubilee of their success with a get-together in the clubhouse.

The evening started with a surprise presentation of the 2018 Club person of the Year Award to Billy Dineen. (There is a separate post on this award.)

The panel, management and club officers enjoyed a lovely meal, which was prepared and served by O’Briens Butchers. The video recording of the1997 final was played on screen as everybody tucked into the turkey and ham dinner. Carrigtwohill defeated Glenbower Rovers in the final at Rostellan on a scoreline of 1-10 to 1-06. Carrig were nominated to play in the county championship quarter-final due to the East Cork championship being so delayed. They lost a great football match, 3-09 to 1-12 to Kiskeam.

Team captain, Seán Barrett cut the jubilee cake. He thanked the club for organising the evening and O’Briens Butchers for the lovely meal.

Diarmuid O’Donovan, the St. Nick’s man who coached Carrig to the championship title recalled that it was his first time training a team outside his own club. He noted how his father had coached Carrigtwohill to their first-ever adult championship in 1981; a B grade title. There were some ‘hairy Sunday morning sessions’ after the previous night’s excesses, according to Diarmuid. He congratulated all those present on surviving the last 25 years.

The 1997 crew finished their evening with some drinks and reminiscing in Guilder’s Bar.

Míle buíochas to Caroline Dixey for organising the room and for having it looking like a hotel. Sincere thanks to all those who assisted Caroline and to Sheila Boland for helping with the catering. We are very grateful to O'Briens Butchers Carrigtwohill for catering on the evening and for serving up a delicious dinner. Many thanks to Diarmuid O’Donovan for attending on the evening. Diarmuid was of great assistance to the club over a number of years.